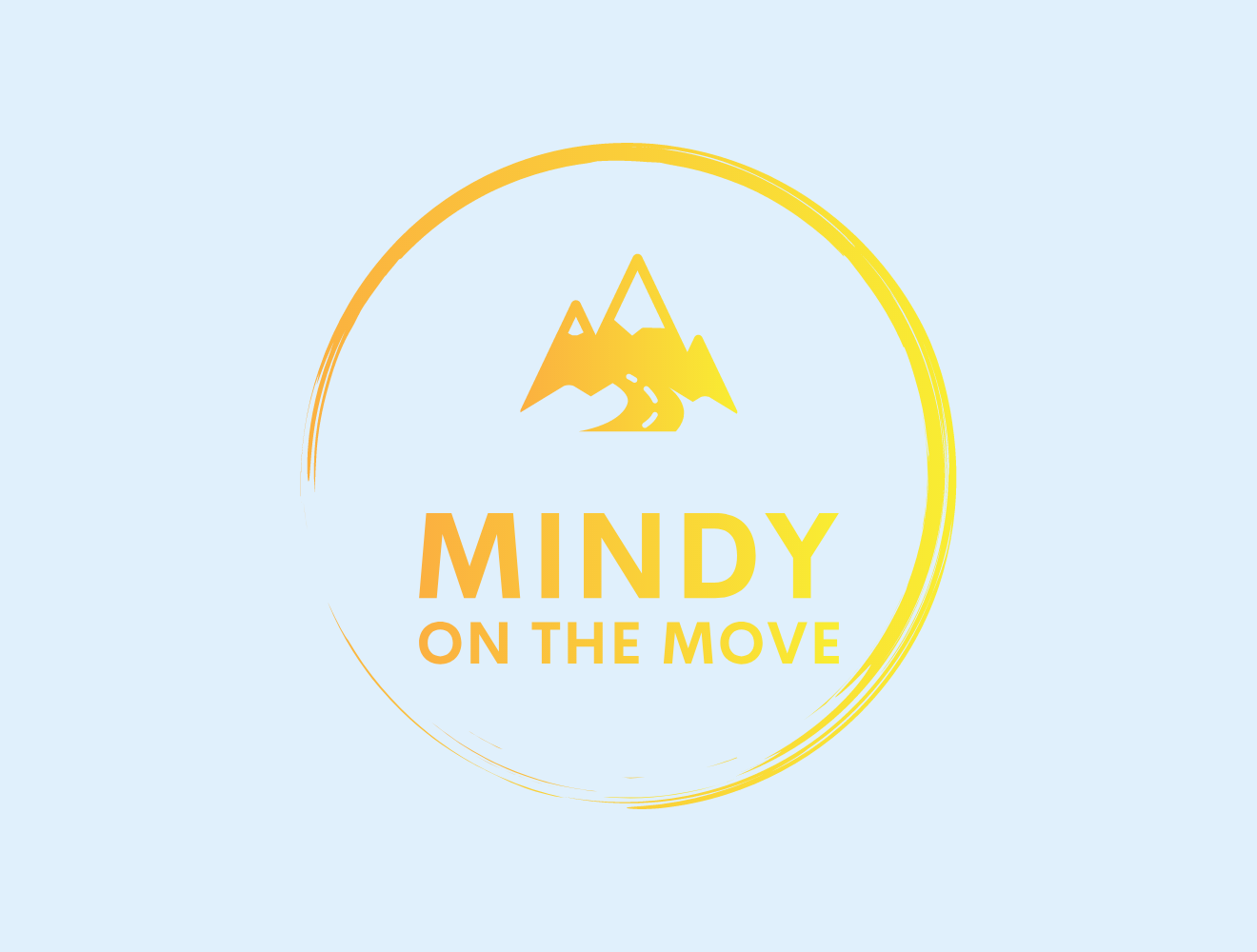 After our stint in Barcelona, my husband and I spent three days wandering and exploring in Rome, Italy this past January.  I was utterly blessed to celebrate my big 3-0 birthday amid the eternal city.  Even though we had limited time, I still conquered all the must-sees and must-dos on my list while maintaining an enjoyable pace.  We were never rushed, yet never bored.  It was an outstanding, captivating and downright surreal experience walking amongst such ancient + powerful art and history.  Here is a quick re-cap of our stellar itinerary that worked out perfectly well for the two of us…

Feeling fancy?  At the base of the Spanish Steps lies Piazza di Spagna overflowing with undeniable opulence and luxury shops aplenty.   There you stand, undoubtedly, in the heart of the shopping district where its easy to spend hours merely meandering through the pristine boutiques.  Then, once you’ve shopped to the point of [almost] dropping, relish a gelato break on the Spanish Steps themselves.  Personally, I enjoyed climbing the steps and taking advantage of the bird’s-eye view over the bustling piazza, people-watching the constant and diverse crowds thoroughly living-up their day. 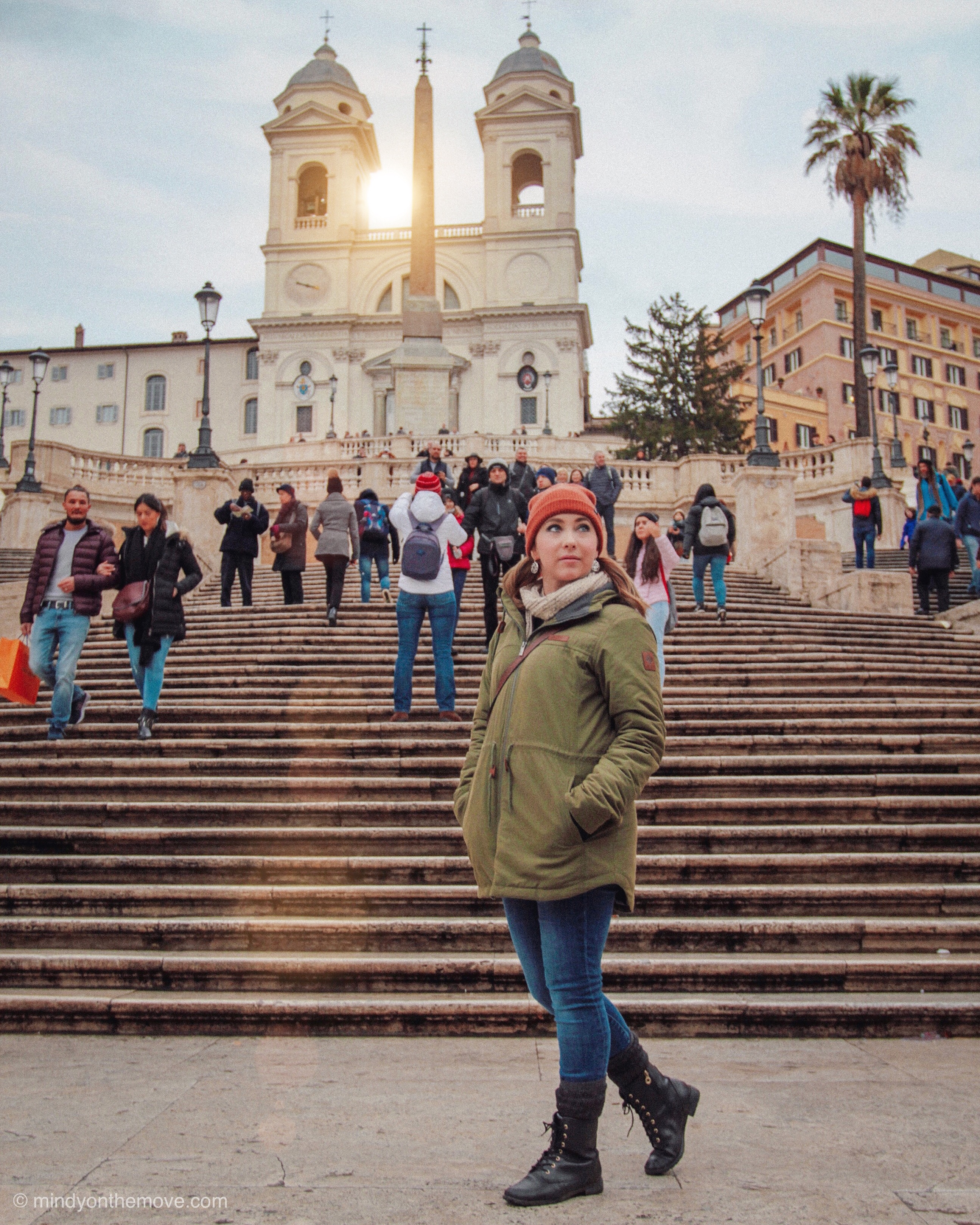 From the Spanish Steps, roam the narrow, cobbled streets for roughly 700m until you reach the intricate and enchanting Trevi Fountain.  Ever since seeing The Lizzie McGuire Movie in my pre-teen years (yes, Lizzie McGuire was my jam), I was fascinated with this romantic landmark.  Oh, and it IS what dreams are made of ;-).

Okay, okay..enough with the adolescent film references; in actuality, the Trevi Fountain was just as remarkable in person as on the big screen.  However, it was MUCH more crowded than I ever anticipated (and I visited during off season – woah!).  I highly recommend enjoying this spectacle as early in the day as you can manage.  Regardless of the crowds, Trevi Fountain is a must-see artwork beautifully situated among Piazza di Trevi.  I could have rested on her steps sipping my macchiato with utmost adoration for an entire morning.  But, onward we must go…

Next up on route: The Pantheon.

Quite possibly my favorite building in Roma (certainly my favorite of day one) is this fascinatingly ancient Roman structure which, nonetheless, happens to be the best preserved of all ancient Roman buildings.  Pantheon means “all the gods of a people or religion collectively” AND The Pantheon was, originally, a pagan temple.  These are a mere few examples, out of MANY, that I learned during my $20.00 USD, hour+ long tour.  You’ll have to explore it yourself to find out more jaw-dropping facts and awe-inducing stories – it’s worth it!

Moreover, finding a last-minute, quick yet engrossing tour of this wonder is a breeze.  All you have to do is stroll alongside its entrance and, POOF!  A guide will kindly approach you and offer his/her services.  The legitimate guides can be seen wearing a uniform badge and carrying around an iPad and/or brochures, etc, along with their company information.  Our tour guide was from the UK and had a delightfully dry sense of humor and wit.  Not once did I cease laughing while soaking in all his comprehensive words and marveling at The Pantheon in all its historical glory.   Laughter + marvel + learning = recipe for a GRAND evening.

Inside The Pantheon, make sure to take a note of each and every gem it withholds – Raphael’s Tomb and the Oculus to name a couple.

On the outside, locate where Galileo stood trial and was condemned by the Roman Catholic Inquisition in 1633 for believing the Earth (and planets) revolves around the sun at the center of the solar system.  I mean, such an absurd man..who would think such a crazy thing!? 😛 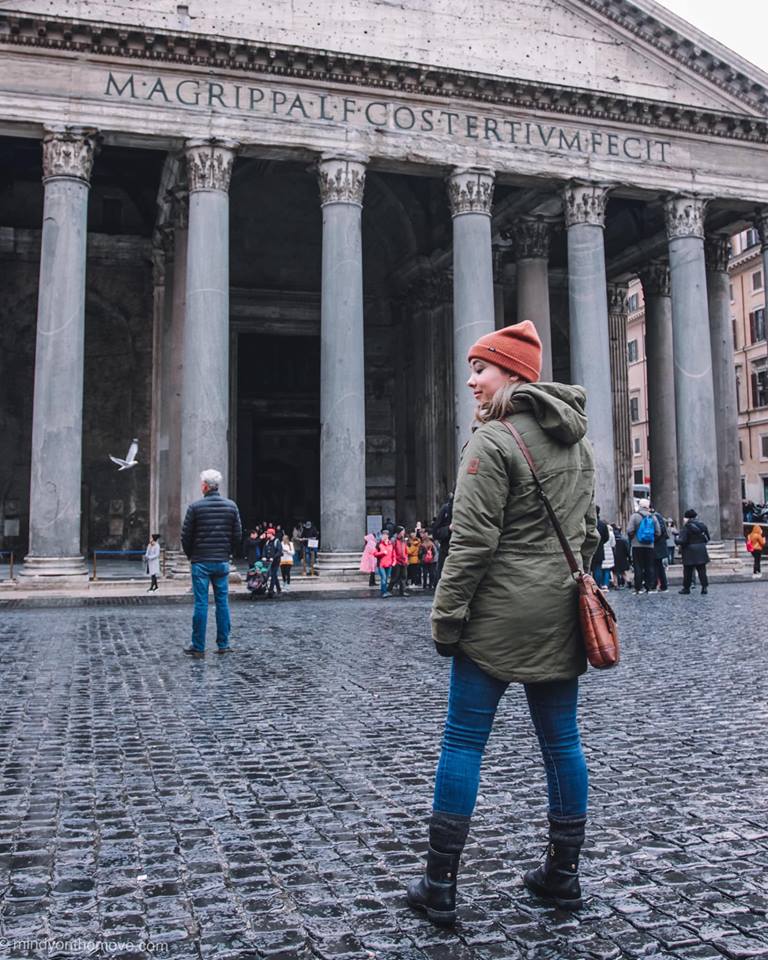 West of the Pantheon, practically next-door, you will arrive at Piazza Navona – a beautiful square complete with three, stunning, architectural fountains.  The largest fountain (in the center), called the Fountain of Four Rivers, represents the Nile, Ganges, Danube and Rio della Plata.  My personal favorite, however, is the Fountain of Neptune with its rose marble sea figures playing in the basin surrounding the statue of Neptune.

Among Piazza Navona, which is rightfully known as one of Roma’s liveliest squares, you will be inundated with an array of outdoor cafes and restaurants to choose from.  The exuberance of the square is part of its charm, in my opinion, and a lovely place to watch the world go by (perhaps with a glass of wine to boot!) as the night scene washes in.

Aah! My 30th Birthday began with a wish come true: walking the primordial grounds of the Colosseum.  The unfathomable past of this place completely mystifies my being.  Even touching it with my own two hands enabled fragments of the past to run wild through my imagination.  Haunting, chilling sensations encompassed me as I felt stories of the past live on among these incredulous ruins.

Perhaps my long-lived fascination with gladiators leant itself to my lucid experience.  Or, maybe, this place is really that impactful (let me know about your experience exploring the Colosseum in the comments  – did you feel similarly/differently?). 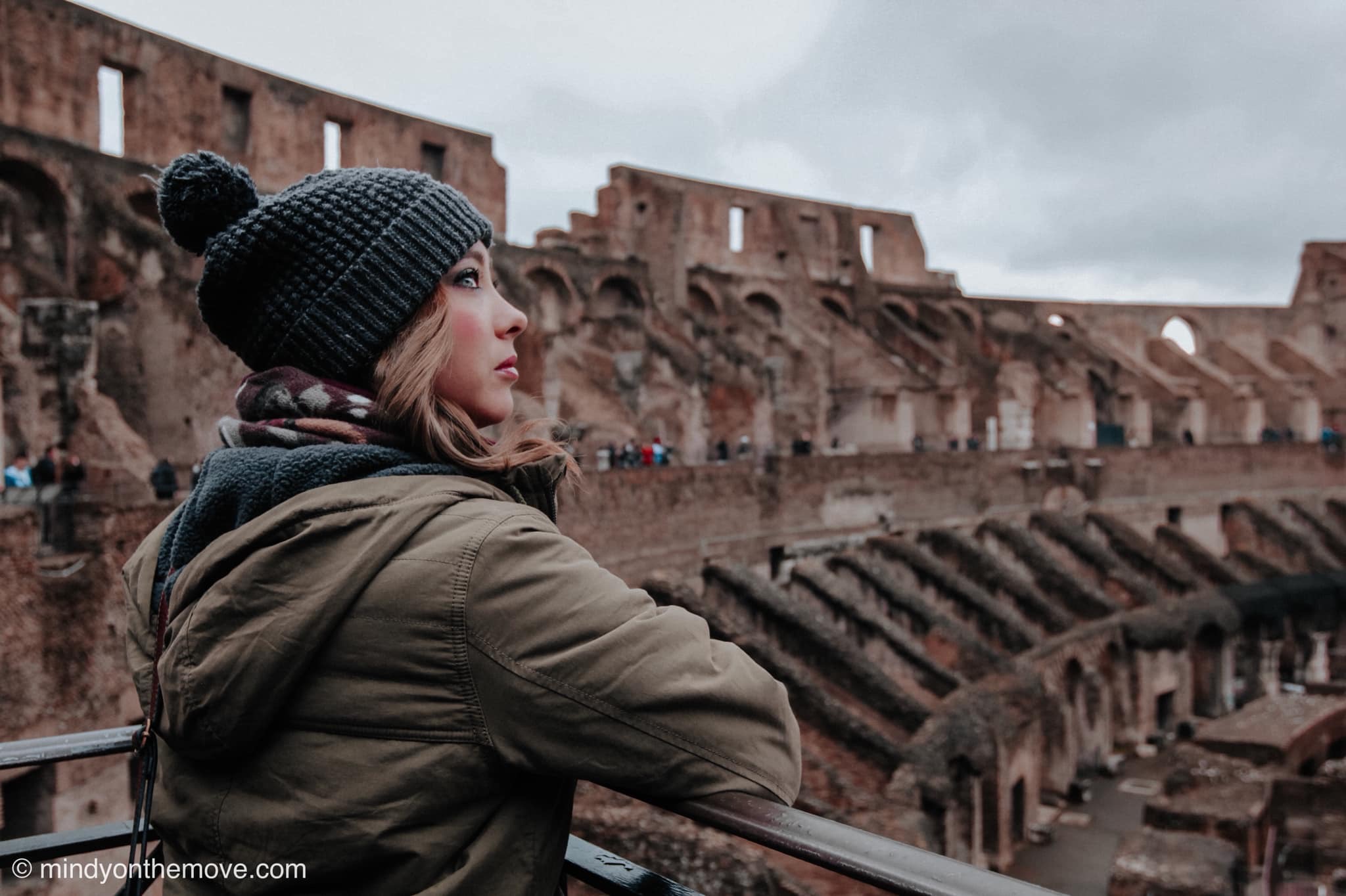 I could not have chosen a better way to begin my 30th year and the fact that this beast was built wayyy back in 70-80AD, sure makes a gal feel much younger. 🙂

After sauntering around the Colosseum for a while, find your way to the adjoining Roman Forum & Palatine Hill.

Probably the biggest surprise of my time in Rome, and a top highlight, was the Roman Forum.  Everyone knows to visit the Colosseum (which tends to be more widely talked about), but what they fail to mention is HOW unbelievable this gem is, as well.  Whatever you do, do not skip this spectacular site.  To my dismay, it’s not uncommon for others to see the Colosseum then bounce.

Walking along one of the most ancient paved roads in history as you’re surrounded by the ruins of several important ancient government buildings at the center of Rome is an indescribable experience.  The reason it’s considered the most celebrated meeting place in the world, and in all history, is evident.  Here, better than anywhere else in the eternal city, one can feel the beat of Rome’s heart. 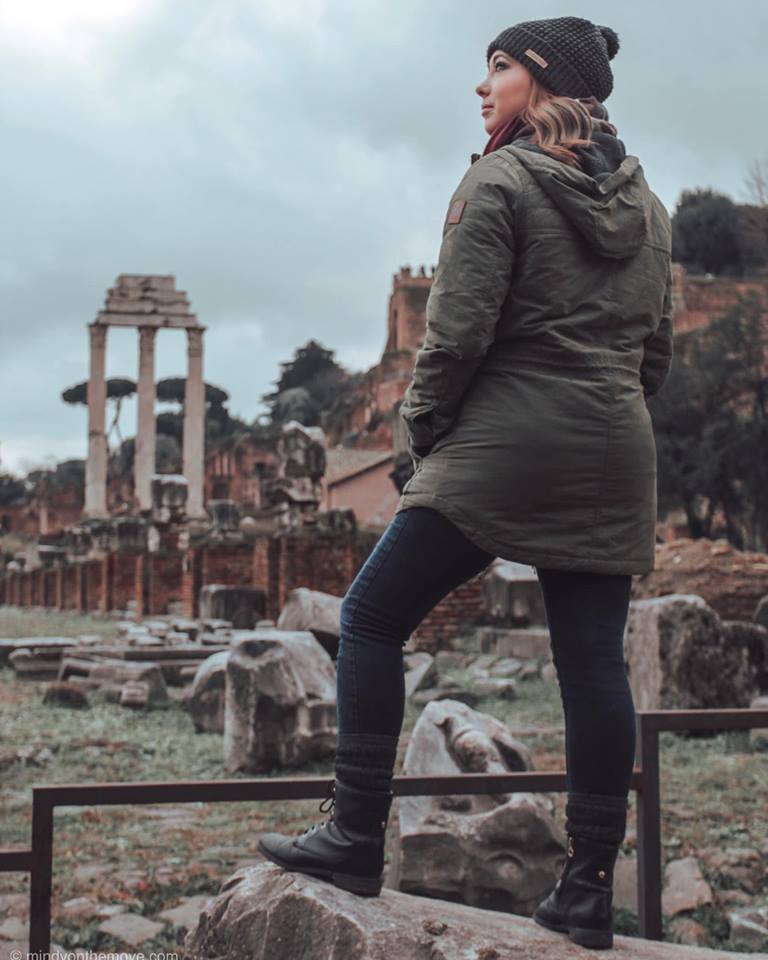 Climb Palatine Hill after your walk among the ruins below to gain a different perspective, 40 meters above the Forum.  As Roman mythology has it, Palatine Hill contains the cave where Romulus and Remus were found by the she-wolf, Lupa, that kept them alive.  It’s known to be their first home.

Not all parts of Palatine Hill are accessible to visitors, but it’s worth the jaunt to see such spots as: Imperial Palaces, the Farnese Gardens and the House of Livia. 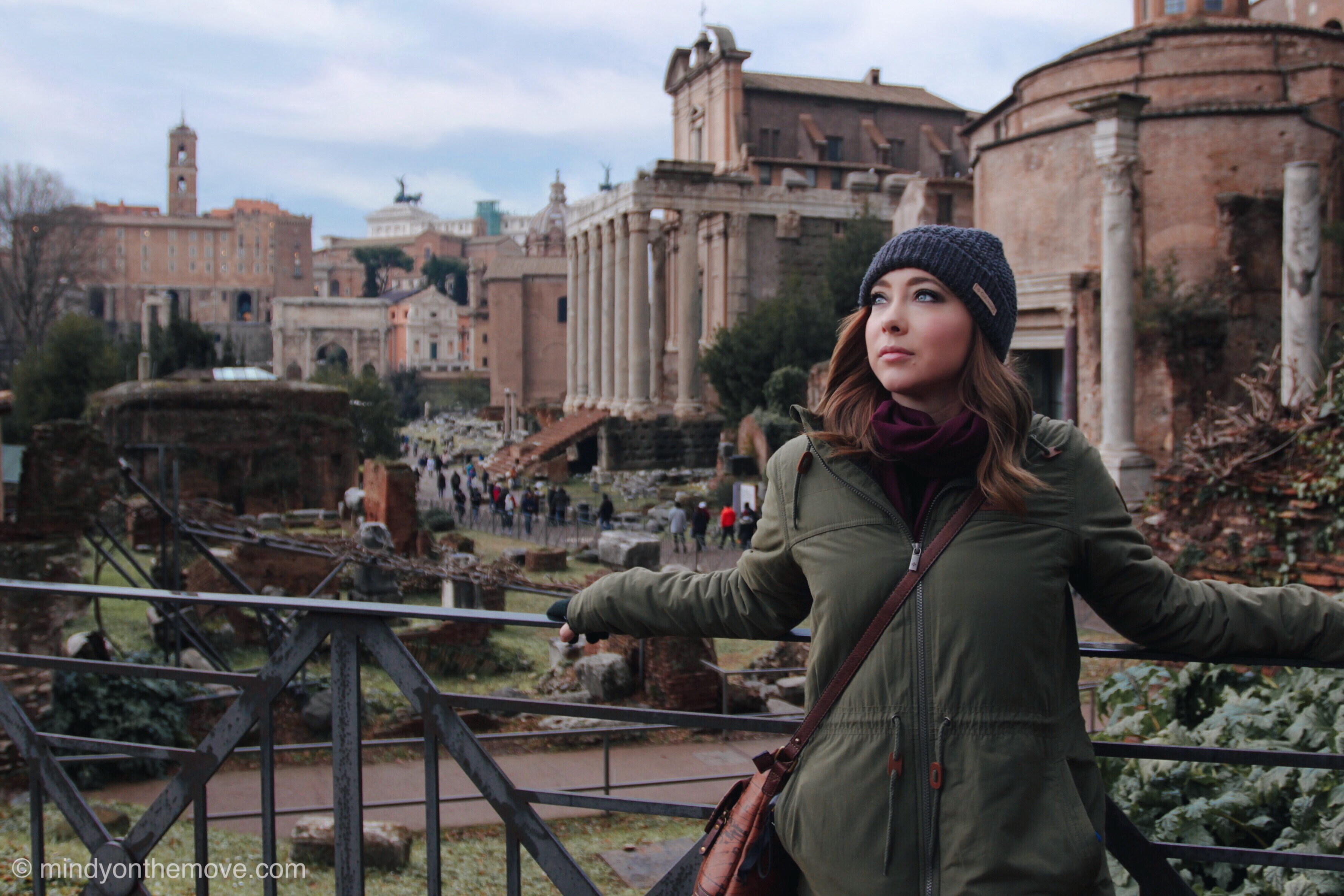 In the evening, there’s no finer place to eat dinner and go out for some drinks than the picturesque neighborhood of Trastevere.  I had the most delicious birthday dinner at the inviting Nannarella – complete with top-notch service and wine.

Furthermore, this neighborhood is so charming that walking its streets and divulging in its abundant nightlife is enough to grant an enchanting experience.  All the colorful buildings dripping with ivy and balconies embroidered with geraniums aid in Trastevere’s small-town + romantic feel.  The image I conjured in my mind of Rome, prior to ever setting foot there, was precisely Trastevere.

The blog SELF-GUIDED TRASTEVERE WALKING TOUR: WHERE TO SEE ROME’S MOST BEAUTIFUL STREETS provided me with immense guidance and inspiration for adventuring throughout this paragon – I highly recommend checking it out!

Vatican City, the world’s smallest country, is a trove of iconic art and architecture.  The overwhelming amount of things to see equates to a full-day visit, no doubt.  Beginning in St. Peter’s Square, the grand entrance to St. Peter’s Basilica, I stood still and absorbed my surroundings: encircling colonnades with statues resting on top, the Egyptian obelisk at the center, two fountains on either side of the obelisk and an incompressible past contained in each stone.  How I wish the stones could communicate all they have witnessed.

Entering St. Peter’s Basilica, I immediately took note of it’s lavish grandeur – each breath is magnified within its Renaissance architecture.  Not only is St. Peter’s Basilica the largest church in the world, it’s also renowned as one of the holiest Catholic shrines.

Slowly meander about the church looking closely at every detail AND, most certainly, looking up at the immaculate ceiling murals well-deserving of adoration.

Journey down below the floors of St. Peter’s Basilica to the Papal Tombs, the final resting place of the popes.  Wander about the corridors while paying respect to the dead; it’s a solemn yet thought-provoking experience to walk among such significant historical figures.  One can only imagine the lives’ and power that eternally rests inside these tombs while their legacy lives on through time.

*Photos are not permitted down in the tombs as it is a sacred space.

Once back up in the land of the living, spend the better half of your day sightseeing the treasures displayed inside the Vatican Museum, including the world-renowned Sistine Chapel.

There are countless – literally, COUNTLESS – halls and rooms to discover in the museum, all containing masterpieces of painting, sculpture and various works of art collected by the popes through the centuries.

Tickets for entry to the museum and chapel vary depending on your preference of tour/line-wait, etc.  However, most average the cost of $35-45 USD.

One of my personal favorite exhibits was the Ancient Egypt chamber where I encountered artifacts dating all the way back to 2300 BC (hieroglyphic sandstone below, for instance).  Oh, and seeing Imhotep’s sarcophagus was a rad highlight of mine, as well.   Apparently I need to get my butt to Egypt – I’m obviously heavily attracted to its history.

Lastly, the Sistine Chapel.  An unreal moment in my life: sitting on a side pew just gazing at the triumphant work of art as utterly speechless then as I am wordless now.  It’s a place where the feeling that overcomes is just as great, if not greater, than the beauty that surrounds.

*Note: You’re not permitted to take photos in the Sistine Chapel.

There you have it folks!  A swift, simple, 3-day Itinerary for your time in Roma, Italia.  It gives enough leeway to add additional sites, tours and stops but also enough time to do just this (all above) –  affording you the freedom to leisurely + aimlessly wander around the narrow, cobbled streets of the eternal city.

Much love and happy travels! 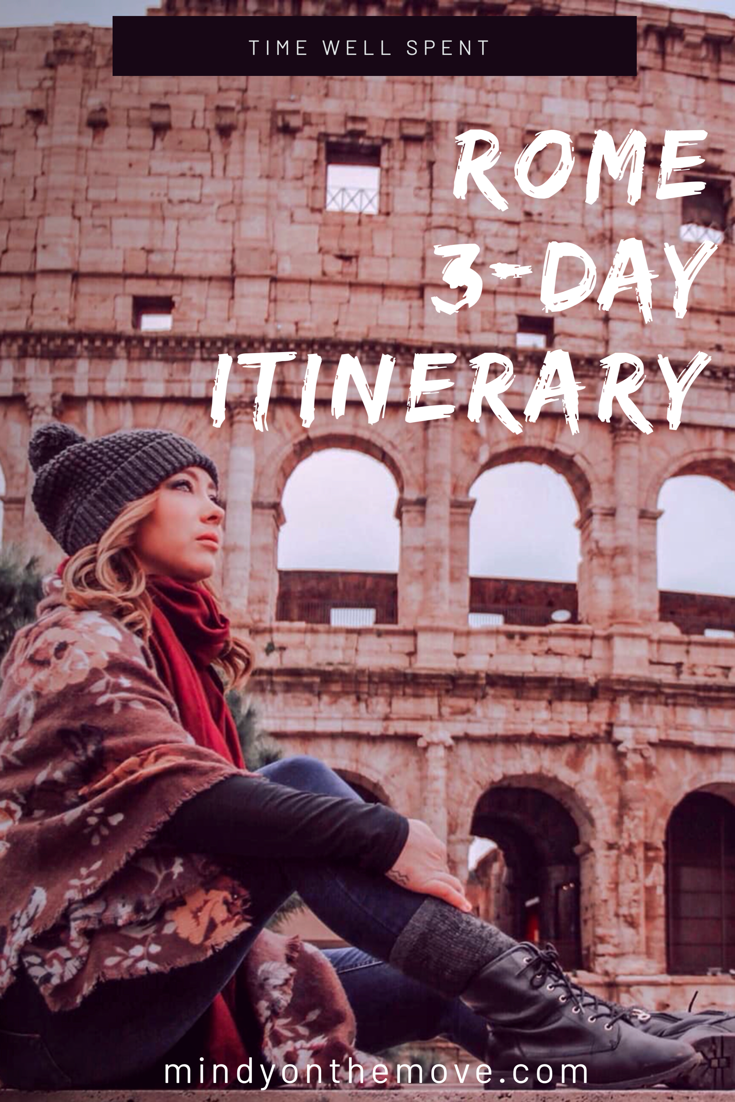